A Brief Recap of the Town Meeting 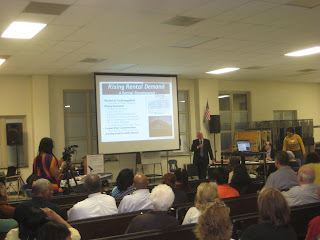 Two dozen speakers at Tuesday's Third Ward town meeting rejected and even derided a real estate expert's assertion that a 600-unit luxury apartment project would be the best use of the shuttered Muhlenberg hospital campus.

Instead, residents and officials alike insisted that nothing less than restoration of full medical care will do for the site where Muhlenberg Regional Medical Center closed in August 2008. A satellite emergency room at the site is due to close next year.

Appraiser Jeffrey Otteau's hour-long presentation was based on a report he prepared for  JFK Health System, which launched a "Moving Muhlenberg Forward" web site dealing with all aspects of the proposed development. Otteau's report includes a determination by the United Health Institute that there is "no viable future for a new hospital in Plainfield." Tracing trends in housing and employment, he offered rationales for the apartment proposal and a retail strip across Park Avenue. 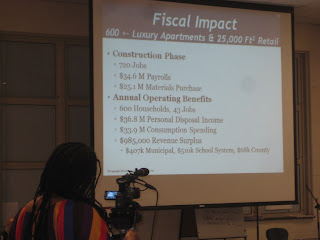 The hospital site is surrounded by one- and two-family homes in the Third Ward and resistance to the proposal began as soon as it was unveiled with the web site. On Tuesday, residents came armed with their own data to counter Otteau's findings, such as a burgeoning Latino school enrollment in contrast to his claim that families are getting smaller. Many of the residents had lived in their homes for decades and did not want a projected 1,125 new neighbors in a four-story building on the former hospital site.

One resident said she had already collected 200 signatures on a petition against rental units on the site and she collected more at the meeting. (There is no development application filed with the city as yet, nor has any developer been named.)

Dr. Harold Yood called Otteau's report a "45-minute scam" and said JFK took advantage of its merger with Muhlenberg to get rid of competition and to acquire all its financial resources. Dottie Gutenkauf, a leader of the Save Muhlenberg movement, urged residents to get on the advocacy group's list serve to receive updates on efforts to restore a hospital at the site. Councilman William Reid called his health care at JFK Medical Center "horrible" and said he would only vote to restore Muhlenberg. Activist Nancy Piwowar deplored the distance to JFK in Edison, which she characterized as life-threatening for stroke or heart attack victims.

Council President Adrian Mapp called all the comments "very compelling" and spoke of veiled threats of litigation if officials did not go along with the proposal. A copy of his January 2011 letter had been passed out to attendees at the beginning of the meeting and as he did in the letter, he urged residents to reach out to elected officials at all levels to bring back a medical facility.

"I stand with you and what you want is what I want," he said.